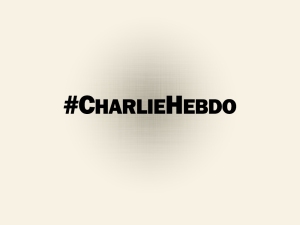 The barbaric and villainous killing of the Charlie Hebdo journalists is no doubt a heinous crime. Indeed, Charlie Hebdo’s only crime was that it expressed an opinion. However erroneous one may believe that opinion to be, never is that a justification for a summary execution such as that which took place today. Rarely do the words of Voltaire ring so loudly; “I do not agree with what you have to say, but I’ll defend to the death your right to say it”.

However, the dynamic emerging amongst the media narrative centres upon an implied accusation directed towards the Muslim community, with hashtags of #notinmyname depicting a sense of responsibility that has resulted in a panic felt amongst some Muslims, reflected in a wave of apologies for a crime they did not commit. Already headlines such as ‘Europe struggles with Islamism’ are emerging, exaggerating the significance of the death of Hebdo’s journalists as Islam’s response to freedom of speech rather than reporting the crime as it is; a despicable murder by criminals against journalists.

Indeed a very dangerous parameter emerges from the barbarity of this extremist minority, fuelled by a media witch-hunt for a social and ideological criminal capable of encouraging such acts. Today’s killing has no doubt compounded the anti-Islam sentiment slowly creeping across Europe. For despite the Muslim Community’s relentless efforts to disassociate itself from the barbarity of a particularly select minority, the media narrative continues to emphasise the so-called ‘Islamic nature’ of these acts; refusing to analyse the Islamic stance in light of the Quranic passage expressly stating that ‘whoever kills a soul unless for a soul or for corruption [done] in the land – it is as if he had slain mankind entirely. And whoever saves one – it is as if he had saved mankind entirely’ (5:32), or even to emphasise that one of the policemen killed defending Charlie Hebdo’s offices was an Arab; Ahmad Muraabat.

The fact of the matter is that every Islamic institution condemns the Charlie Hebdo killings, just like every other believer in the sanctity of human life. Despite their ill-considered, racist, offensive, degrading, and derogatory depiction of the Prophet Muhammad, irresponsibly implying that Muslims follow a religion that condones terrorism in cartoons which only exacerbated existing tensions between Europe and the Muslim Community, and has fuelled racist far-right party support across Europe, the majority of Muslims simply called for the withdrawal of the publication.

The more immediate issue now is the timing of this act which only fuels the current social paradigm that has begun to alienate large sections of the Muslim community from European societies. As the community is wrongly held to fault for the transgressions of tiny extremist elements; and as the media paints the entire community with one brush, so the matter of dialogue becomes ever more distant and both parties begin to isolate themselves from one another. This latter point is fundamental for only with the cooperation of social activists, preachers, and government policy makers can the issue of extremism be tackled.

Many will blame the Muslim community for not providing sufficient checks on its own members and permitting the spread of extremism; or perhaps turning a blind eye to this problem. Indeed many will claim that the Muslim community needs to learn to control ‘its own’ or ‘get out’. However, the problem is not as one-sided as the media and many other personalities would like to believe. For indeed it is events with a more international aspect in Egypt, Saudi Arabia, Syria, Iraq, Yemen and Libya, and the international stance taken in each of these countries that have exacerbated and fuelled extremism in our own borders, coupled with the growth of anti-foreigner sentiment exacerbated by the economic crisis which has led to high numbers of unemployment. A failure to appreciate this fundamental point damages the credibility of efforts in the fight at home.

As long as the Muslim community is forced to accept responsibility and apologise for acts it has never committed, propagated, or endorsed, so will the alienation continue, creating a social gap that screams for dialogue, debate and understanding that will only lead to further isolation and greater momentum for extremism.

The Hebdo killings are a barbaric and criminal act. But it is unfortunate that the vigour with which the media has reported and analysed the killings eclipses the volume or detail of reports on the Syrian refugees being refused entry to neighbouring countries to escape daily massacres; the Rohingya in Burma facing daily persecution both in their own country and in Bangladesh; and in Paris, the police treatment of French Arabs and Blacks in the banlieue.

Do not forget to subscribe to our weekly briefing.